Puglia and these small festivals, known as sagra, are amazing.  During the summer you can taste many different kind of street food and you never will be disappointed. Salento’s capital, Lecce, is one of Puglia’s most beautiful cities thanks to imaginative, Baroque architecture and a handful of impressive Roman ruins. It is also a great place to eat Taralli, one of its most popular street foods.

A cracker similar in texture to a breadstick or a pretzel, taralli are crunchy, curly-shaped biscuits that are boiled and then baked and they can be sweet or savory. Sweet taralli are sometimes glazed with sugar and they are often dunked in red wine. Savory taralli may be flavored with onion, garlic, sesame seeds, poppy seeds, pepper, chili… taralli al Finnoccio are a popular version, flavored with toasted fennel seed.

Rustico is a little “sandwich” of bechamel sauce, chopped tomatoes and mozzarella cheese enclosed by two circles of puff pastry. The legend has it that chefs from the nobile houses of Lecce created it as an interpretation of the French vol au vent.  The puff in this pastry, however, comes from strutto (lard) not butter.  With butter each layer is flaky and crisp; with lard, the pastry layers have a richer and softer, almost pillow-like, texture.

Friselle with Tomatoes is an easy and healthy food from Puglia.

To prepare Friselle, you dip them in water to soften them a little. Typically, you garnish them with local tomatoes, salt, oregano and drizzle Pugliese olive oil over them. The sweet and soft tomatoes contrast nicely to the still crunchy friselle, and the olive oil adds a lovely flavor. This is a true summer food, beacuse  they are even better dipped in sea water.

Tomato, salt, oregano and olive oil is the basic recipe… of course you can add capers, olives, ham and cheese!

“Pittula” or “pittola” is almost certainly the diminutive of “pitta”, focaccia. Basically pittule are small balls of fried dough, simple or dressed with a bunch of different things: boiled cauliflower pieces, raw shelled mussels, capers with raw tomatoes and boned anchovies in pieces. There are so many variations of pittule!
Pittule are a light starter, and the tradition has always been to serve this dish on the 7th of December, the eve of the Feast of the Immaculate Conception, even if today they are prepared for many other occasions because they are simply delicious! 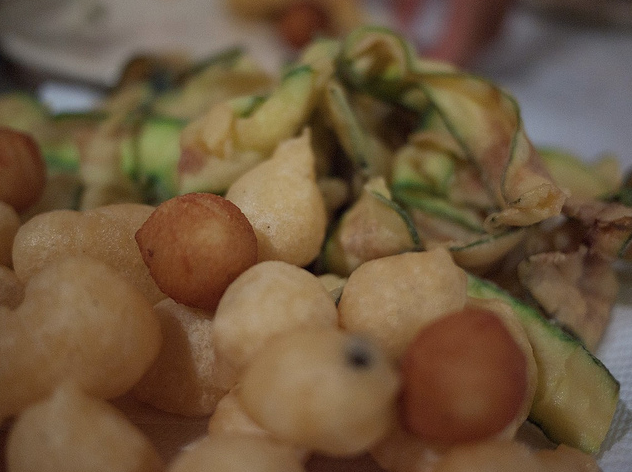 And Now For Something Sweet !

Pasticciotto (we can maybe translate “little mess”) is a nice and delicious cake that belongs to the culinary traditions of Puglia, and Salento in particular. Its origins are very old, in fact, seem to date back to the eighteenth century

It seems that the Pasticciotto was born in the village of Galatina, in the province of Lecce, from the hands of a master pastry chef while trying to invent a new and original sweet. He used what was left over from a previous mixture, to give birth to a tiny cake.

The pastry chef, not giving importance to the result which he called a “Pasticciotto – little mess”, gave it to a passerby. The cake received an unexpected success, and the passer-by asked the baker more pasticciotti

Il pasticciotto is a sweet pastry, filled with delicious custard that is served hot. It is also a dessert that is widely consumed during the holiday season.

And for the real pasticciotto lovers there is the big Pasticciotto cake!

The exquisite food of Apulia and Salento is the essence of Mediterranean. Sun, sea, rich soil and multiple cultures blend in the intense flavors and aromas of my region